What Your Fingernails can Tell You about Your Health

Healthy fingernails should be pink with a touch of pinkish-white (moons) near the base. If your nails are dull-looking colour, or streaked with other colours, you may have a hidden health problem.  Our nails tell us a lot – they aren’t the only warning system of course, but can be helpful.

Here are some more signs to look for:

Split nails: are when they seem to flake away in layers, they could be due to:

Concave (spoon) nails: are nails which are soft and curve upwards forming a dip that is often big enough to hold water, and may signal a number of internal issues:

Very often as your health challenge is sorted out, your nails will return to normal in time

Ridges: on nails are not natural, and may indicate:

Dry, brittle nails: mean you should check your hormone levels and your gut flora could be dysregulated as a result of antibiotics or other medications, trauma etc:

Clubbed nails: are when your skin swells around the nail, or if the nails seem to have puffed around your fingers, they are then called “clubbed” and may mean:

If you are concerned, your nail signs could motivate you to see help. 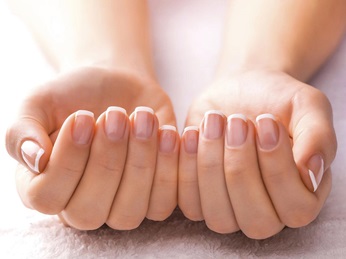