VITAMIN B12 – and why it’s important
I was asked this morning to repost an article on B12 (I’ve done quite a few) but I THINK this is the one. So here it is. Part of the B family of vitamins. It is one of the most important of all. Playing a role in DNA synthesis, metabolism, red blood cell production, and nerve function. It’s a water-soluble vitamin, discovered in a search for a cure for the disease known as pernicious anaemia.
Many people have vitamin B12 injections for ‘energy’ but energy is derived from the food we eat not individual vitamins. Having said that if you are anaemic due to B12 deficiency, you will feel weak and fatigued. In this case B12 will make a difference to your energy levels. A deficiency in this vitamin can actually be fatal. Pernicious anaemia for example damages the brain and spinal cord resulting in irreversible cognitive dysfunction and neuropathy. Death may also follow without treatment.
Vitamin B12 and folate work together in the formation of red blood cells and if either of these are in short supply red blood cells grow larger than normal. This is called macrocytosis and these can literally crowd out the healthy blood cells. This can and will lead to anaemia. Folate deficiency is serious but not quite as much as B12 deficiency due to the effect B12 has on the nervous system. You’ll need to know whether it is in fact a folate or B12 deficiency you have but to be on the safe side, always take them together.
Dementia is a possible outcome of B12 deficiency as it’s needed for brain function. There really is no excuse for B12 deficiency though, as it’s so easy to correct. Not all dementia is due to B12 deficiency but it’s something to consider if you are older and feel your memory isn’t what it used to be. Healthy homocysteine levels also rely on vitamin B12, along with vitamins B2 and folate. This is also a serious matter as higher levels are associated with an increased risk of heart disease. While the healthy range is supposedly lower than 8mmol/L, the world expert, Dr Kilmer McCulley recommends lower than 6mmol/L, as each number above that can be associated with as much as a 35% increase in risk.

Vitamin B12 ONLY occurs in foods of animal origin such as meat, poultry, eggs, fish, game and dairy products. This could put vegans and vegetarians at risk of serious deficiency. So-called B12 in plants is an analogue (not the real thing) and further deplete the body of B12. Another thing to consider is this crazy trend to “alkalise” the body. To anyone with a sound biochemical background, this is nothing short of lunacy. Stomach acid is supposed to be close to battery acid (that’s how we were created). If your stomach acid pH is compromised (not acid enough) you will not derive enough B12 from the food you eat. Add to this the compounding factor that certain people lack a vital protein called “intrinsic factor”needed for B12 absorption.

If you are short of B12, try taking a METHYLcobalamin supplement under your tongue, but do NOT fall for the synthetic version called CYANOcobalamin. In fact cyanocobalamin isn’t something your body should have to deal with. It exists only as a chemical synthesized in a laboratory. It doesn’t occur naturally in any living organism. Additionally, if you are taking a folic acid supplement it is a very good idea to balance that with a B12 one.
You will find a really good one in my online store at https://sallyanncreed.co.za/shop. Add the B Complex too – and you’ll have a perfect marriage of B nutrients. 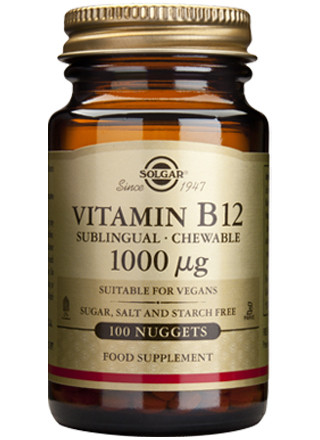