The Problem with Soy

The Problem with Soy

Are you using soy milk thinking it’s healthier than dairy, or perhaps taking isoflavones for menopausal symptoms – or even eating tofu as a “healthy” alternative to animal protein? Many people today perceive soy products to be healthy, but nothing couldn’t be further from the truth.  The risks to your health associated with soy are significant and worth looking at closely if you are considering soy as a dietary addition.  While this article could go on for the length of an entire book, I’ll cover just a few areas to give you a good idea of the dangers you face when consuming soy products.

Soy certainly is not a healthy alternative to HRT by any stretch of the imagination either, in fact it may worsen your symptoms.  At the end of a 2-year study (published in Aug 2011 Archives of Internal Medicine) showed no improvement in symptoms or bone loss.  Even a very small amount of isoflavones have the ability to disrupt hormonal balance (around 1 cup of soymilk).  In fact dietary estrogens in the form of soy foods were found to have the potential to disrupt the endocrine system with the effects in women similar to taking the breast cancer drug Tamoxifen (Proceedings of the Society for Experimental Biology and Medicine 1995 Jan;208(1):51-9).

A study done in 1999 found that just 2 tablespoons daily of roasted and pickled soybeans for 3 months (given to healthy adults receiving adequate iodine in their diet) was enough to cause thyroid suppression with the characteristic symptoms of malaise, constipation, sleepiness and even goiters (Nippon Naibunpi Gakkai Zasshi 1991, 767:622-629).  It blocks the T4 to T3 conversion.

In the East very little soy is actually eaten and it’s all fermented in the ancient way.  There is a dark side to soy too. In an excellent article entitled “The Ploy of Soy” by Sally Fallon and Mary G Enig, Ph.D., of the Weston A. Price Foundation – Fallon and Enig put the nutritional realities of soy consumption into perspective.

Here are a few of the key points they make:

Soy intake may also increase kidney stone risk. A 2001 study published in the Journal of Agricultural and Food Chemistry showed how soybeans, tofu, and commercially processed soy products contain extremely high levels of oxalate. This is a compound that binds with calcium in the kidneys. It also increases the risk of kidney stone development.

91-98% of the world’s soy is genetically modified. The genetic modification is done to impart resistance to the toxic herbicide Roundup. While this is meant to increase farming efficiency and provide you with less expensive soy. The downside is that your soy is loaded with this toxic pesticide. This toxic pesticide has been fingered in many cancers especially kidney cancer. There is also concern that it may cause Parkinson’s Disease.

It’s also inflammatory.  Inflammation from a soy allergy can develop anywhere in the body where there’s soft tissue. The most common places, besides in the gastrointestinal tract, are in the nose, lungs and skin. You could experience nasal congestion, sneezing, a runny nose, postnasal drip and sinus pressure pain from nasal inflammation, according to the Cleveland Clinic. The lungs can swell, leading to asthma symptoms such as shortness of breath, chest tightness and wheezing. Hives, eczema and general itching are common skin inflammations from a soy allergy.

Animals are fattened on corn and soy all over the world – it’s in the feed for every kind of animal, and is almost always genetically modified.  If this fattens them, why would we think we’d not put on weight from soy?  Soy is one of the most lucrative crops around. Sadly at the expense of other crops this awful bean is being grown instead of nourishing vegetables. As well as instead of putting animals back on the land. Over 350,000 farms in the United States produce soybeans. This accounts for over 50% of the world’s soybean production and $6.66 billion in soybean and product exports in 2000 (heaven knows what it is now…).

Soy has a metabolic estrogenic effect in the body.

If you’re male you may want to think twice before consuming processed or unfermented soy products, as these types of soy can be feminizing. Excess estrogen in men is a known cause for gynecomastia (fatty breasts in men), prostate enlargement and cancer. Women shouldn’t have excess estrogens circulating throughout the body either. Estrogen dominance is a known cause for PMS, breast cancer and other female disorders. If you can’t figure out why your stubborn fat and metabolic disorders increase the problem may well be the processed soy you are eating, perhaps without realising it. Whether it is soy milk, soy ice cream, veggie burgers, tofu or other processed soy based products, all overwhelmingly contribute to an excess of estrogen in the body. Bottom line soy is fattening for man and beast.

Do You eat Soy?

And in case you think you eat little or no soy – check the label.  Surprise!! Soy is in everything today. From so-called health foods to cereals, breads, medications, meat products, protein bars and almost 100% of processed foods. You name it and you will probably find soy present.  The only sure way to eliminate soy is to eliminate processed food completely and eat real food. It’s in everything from dog food to take-aways to baby food to vegetable oils.

How to Recover from Being ‘Over-Soyed’

The gut will need healing if you have been exposed to a lot of soy.  Eliminate all grains and all sources of soy.  Introduce a lot of bone broths, sauerkraut, kimchi and other cultured foods, coconut oil and probiotic supplements.

These can include thyroid damage, immune system collapse, reproductive disorders of every kind including infertility, ADD/ADHD, learning disabilities, depression, anxiety and other mental health issues.  Tragically babies are placed on soy as an alternative to milk. The allergies and digestive issues that follow are often not linked to the formula feed.

In 2005, Israel’s health ministry recommended that soy products be limited in young children and if possible, avoided altogether in infants. In issuing such a caution Israel joined France, New Zealand, and Australia in officially embracing a better-safe-than-sorry approach for the next generation. Soy damages people in a variety of ways and to varying degrees. Nobody needs it, best to avoid it and totally eliminate it.

Published in the Lose It! magazine by Sally-Ann for Issue #4 in 2014

Originally published on https://www.facebook.com/SallyAnnCreedSA/ in 2018. 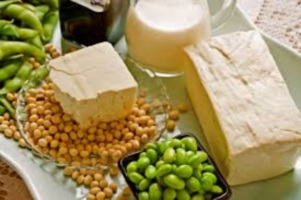